The intense dynamic between the engineers and the “landscape advocates” involved in the Reichsautobahn design  is best illustrated in the debate on how the highways should be laid upon landscape. The engineers, following the logic of the railway, opted for laying the highway as a straight line, intermitted with a minimal number of short curves, irrespective of the vistas, landscape features or of the experience of the environment that the road creates.

On the other side, the “landscape advocates” had a different vision, more in tune with the environmentalist and Heimatschutz discourse. They proposed to lead the highway as a constant sinuous curve that would be defined precisely by the vistas and the landscape features, not always taking the shortest, safest, or the most economically sound route. The straight versus the sinuous became the subject of heated debates, with the sinuous winning in the end, at least on paper and in Reich’s intense propaganda of the project. 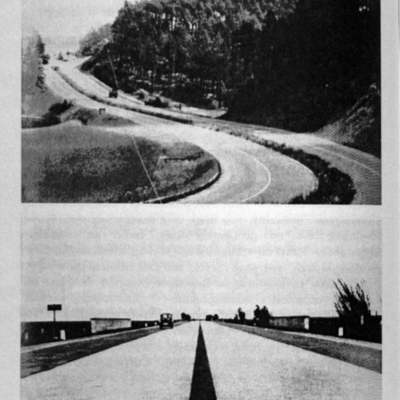 Finding the German Heimat: Space-Producing Practices of the Reichsautobahn 1933-1941