Adding a complexity to Chris Marker's film 'Statues also Die,' the use of African masks play a more interesting role in the use of relational space between the physical and the metaphysical, 'According to the anthropologist Frank Herreman:
One of the most dramatic manners whereby the contact between humans and the supernatural acquires a visible form is at the moment that spirits under the form of masks appear. According to our understanding, the mask is a means of partially or wholly covering the face or the body to render it unrecognisable, and through which the masker acquires another identity. In large parts of the world the original function – associated with the supernatural – has declined, and masking has evolved into a form of profane recreation coming to the fore only once or at most a few times per year, for example during carnival. In West and Central Africa, the function of a number of masks has remained much closer to its original significance. Consequently, such masks still manifest at crucial moments during the cycle of the seasons, and within the course of an individual’s life cycle as well. The mask wearer in this context is, therefore, a more important person than someone who masks for purely recreational motives. In the African context the mask wearer is always an initiated person whose identity is not made known. He undergoes not only a physical, but also a psychic transformation. He comes under the spell of the spirit that he incarnates, and one believes that he so disposes of the supernatural characteristics of the latter. Since the supernatural stands outside the law of the living, one supposes that the mask acts according to its own whimsy. In these acts, however, sits a structure that is dictated by the priest, the magician, the society, the elders, or other forms of the power structure. They must watch over the observance of religious rules, the common law, and the maintenance of various rituals which must be carried out within the scope of events in life’s cycle. Thus, the masks are important instruments that aid in the consolidation of the position of power of the various authority structures.' 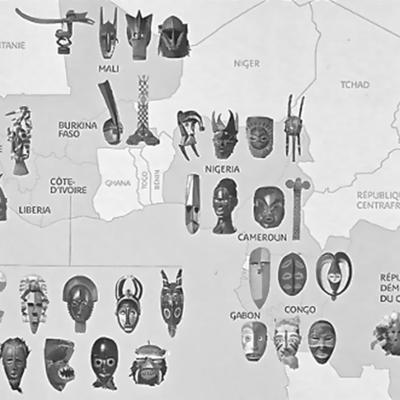