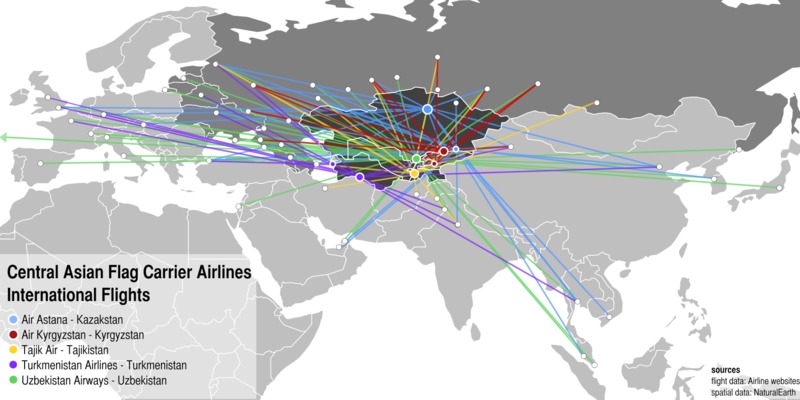 This is a map consolidating all the above route maps, showing the region-wide priorities. While the connections to Moscow were maintained, new destinations like Istanbul and Urumqi acquired new importance. But the network of inter-Central Asia flights collapsed; there are now as many connections from Central Asia to Kuala Lumpur, Amritsar or Surgut as to Tashkent, once the hub of Central Asia. Though inter-regional travel certainly still happens between some of the Central Asian states, the absence of fast transit in terms of air travel is telling of lukewarm (at best) political relationships in the region.

Finally, where Moscow was once the gateway to the outside world, the identity rebuilding project of these newly independent states is evident even in something as banal as their transit infrastructure. While flights out used to be oriented to European Russia, the investment in flights to South and Southeast Asia might be an indication of the aspirations of a new Central Asia, oriented toward the South rather than the North.