Epic Departure and Legacy of Abadan 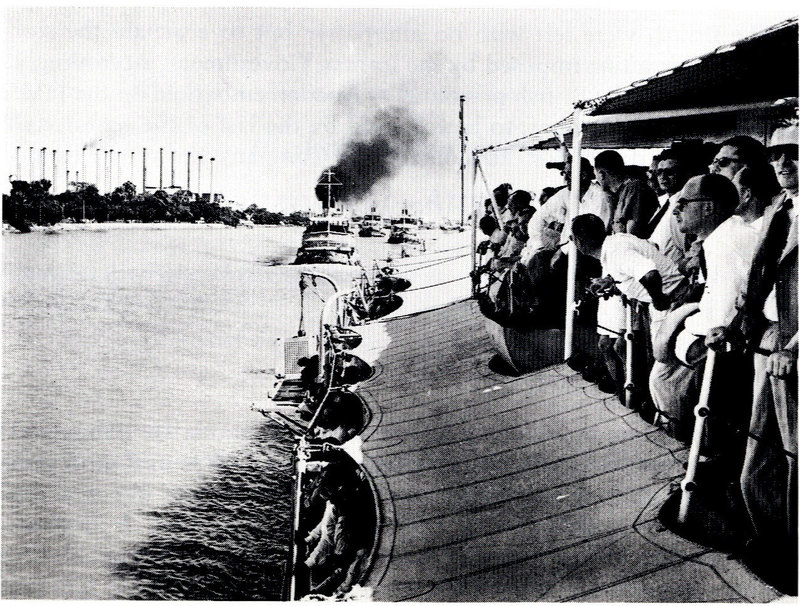 The British onboard the Mauritius.

In 1933, an agreement was negotiated to increase the terms of the D’Arcy concession to 1994; however by 1951 said contract was annulled and the British were expelled from the Braim with riots which came to be known as the Abadan Crisis. In October 1951 all the remaining British employees and their families gathered in Gymkhana Club and boarded the Mauritius and slowly headed up the river with the band playing “Colonel Bogey”.

Although the 1980 invasion of Iran by Iraq led to the destruction of Abadan and the city that has influenced so many other ‘company towns’ in the Middle East; its legacy is still powerful and its impact potent. While there is a long history of ‘company towns’ within large capital firms in the industrialized nations; the actual urban model of a ‘company town’ in the Middle East most definitely traces back to Abadan. It can be argued that the people of Abadan had a long strong sense of identity which can be has served as a model that has been employed and implemented within the larger context of the Middle East. The social hierarchies, the architecture, and the spatial embodiment of the ‘company town’ in Abadan was adopted in Dhahran in Saudi Arabia, Kirkuk in Iraq, Ahmadi in Kuwait, and Brega in Libya and the larger ‘anti-western’ policies that those cities also adopted. The impact of Abadan as a ‘company town’ has led to the wave of natiolization regimes and the need to “-ize” the workforce of these ‘company towns’ in the wake of the major oil crises.

← Society and Difference
Epic Departure and Legacy of Abadan