Much of the data collected for this project derives from the extensive travel narratives penned by Dutch, German, and English-speaking doctors and naturalists who traveled throughout Russia's southern regions describing the landscape and natural resources they found there.

The volumes they ultimately produced were often richly illustrated and presented the rest of the world with a view of Russia's southern regions as full of economic promise. 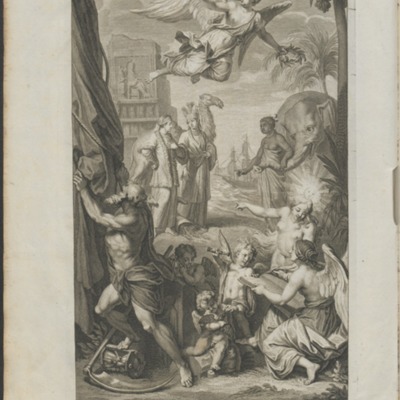 Cornelius de Bruyn (1652 - 1726) included a remarkable frontispiece to accompany his Travels in Muscovy (1737), seen here to the left. A Dutch trader and artist, de Bruyn visited Russia from 1701 to 1705, touring the extent of the Volga and describing Astrakhan' as well as many other Russian towns in great detail.

Similarly Jonas Hanway (1712 - 1786) illustrated his travel account, An Historical Account of British Trade Over the Caspian Sea (1753), with an almost literal depiction of Russia's southern regions divided between 'Britannia' and 'Persia'.

"This city [Astrakhan'] is surrounded by gardens and vineyards, which lie about two miles from it. These produce almost every kind of garden-stuff known in England, except potatoes, collyflowers and artichoaks; and their orchards furnish them with plenty of apples, pears, cherries &c. Olearius commends the fruits of Astrachan, but I met with none extraodrinary, except the water-melons; which are in great esteem, and are in colour, flavour, and taste, much the same as in Portugal. The court find the grapes delicious enough to bear the great expence of land carriage, as already mentioned. The wine of Astrachan is also very indifferent. As their summers are generally dry, they were obliged to water their gardens; this is done by large wheels, some of which are moved by horses, others by wind. These wheels are of a sufficient hieght to throw the water into the highest part of the garden, from whence it runs in trenches to the root of every tree and plant. The gardens and vineyards are generally watered in this manner, from the middle of May to the middle of September." 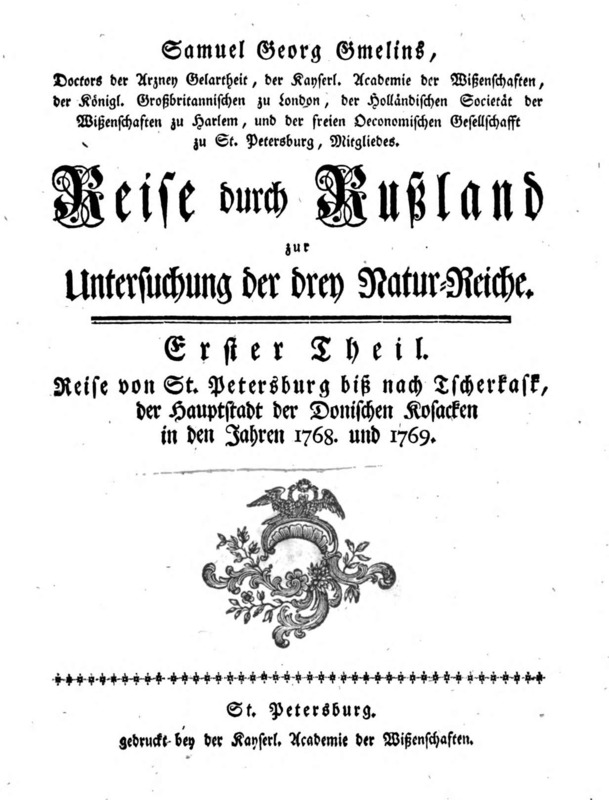 The single most important travel narrative, however, for this project so far has been Samuel Gottlieb Gmelin's Reise durch Russland zur Untersuchung der drey Natur-Reiche, 4 vols. (1770 - 1774).

From 1766 to his death in 1774 Gmelin traveled extensively along the Don and the Volga Rivers, along the coasts of the Caspian Sea and deep into the Caucasus at the behest of the Imperial Academy of Sciences, studying the “three realms of nature.”

Gmelin was taken as a hostage by Usmey Khan during these travels and died in captivity at the age of 29.