The vineyards, orchards and garden patches that dotted Russia's historical landscape are difficult to resurrect, but they appear here and there on maps, in book illustrations, and most often in narrative descriptions penned by traveling doctors and naturalists who often took the time to describe the abundant gardens around Astrakhan'.

This manuscript map of Astrakhan' (on the left) dates to years between 1700 and 1705. Though Astrakhan' was long an important port and bustling city with a growing population, this map captures only a handful of key elements about the city: the walls protecting it, the prevalence of churches, the existence of walled communities of foreign traders and, most importantly, the presence of gardens on the outskirts of the city.

In the detail taken from the manuscript map (on the right) one sees the gardens of the tsar (to the far left and far right) and the gardens of the Metropolitan (in the center) clearly indicated. The appearance of small figures in the far right garden of the tsar suggest, perhaps, the presence of guards or gardeners enlisted to protect the tsar's agricultural investment. 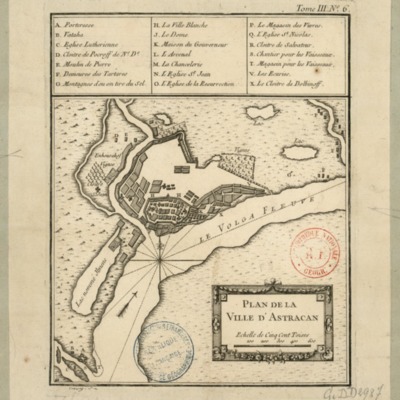 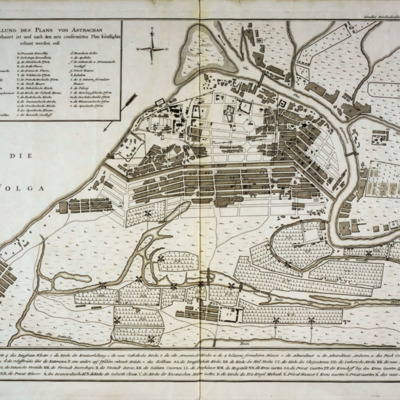 By the 1760s and 1770s the gardens of Astrakhan' had grown significantly. Jean-Baptise Croissey produced a map in 1764 (on the left) featuring the city's vineyards prominently. Later Samuel Gottlieb Gmelin included a map of Astrakhan' in his 3-volume Reise durch Russland ... that showed the city's gardens expanding east to west across its southern extent. Gmelin's map also corroborates various travel accounts that describe the clever use of windmills to irrigate these gardens. 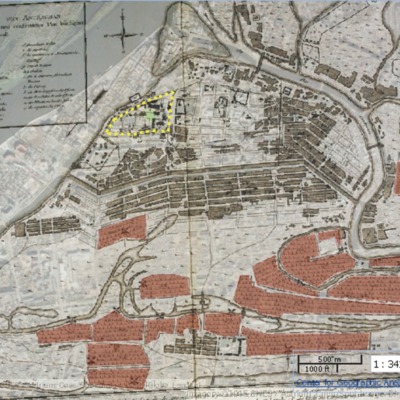 This map, constructed in WorldMap, overlays Gmelin's 1774 map of Astrakhan' over currrent day Astrakhan'. The city's Kremlin, outlined in yellow in the upper left hand corner and the course of the river remain more or less the same for over 200 years.

This map removes the historical map layer and projects where, according to Gmelin, the city's gardens would have been and their relative extent.

Gmelin's 1774 map is accurate enough to be projected onto the current extent of the city of Astrakhan'. You can see here the extent of some of Astrakhan's many gardens, which used to cover what have become numerous suburbs and major roads.