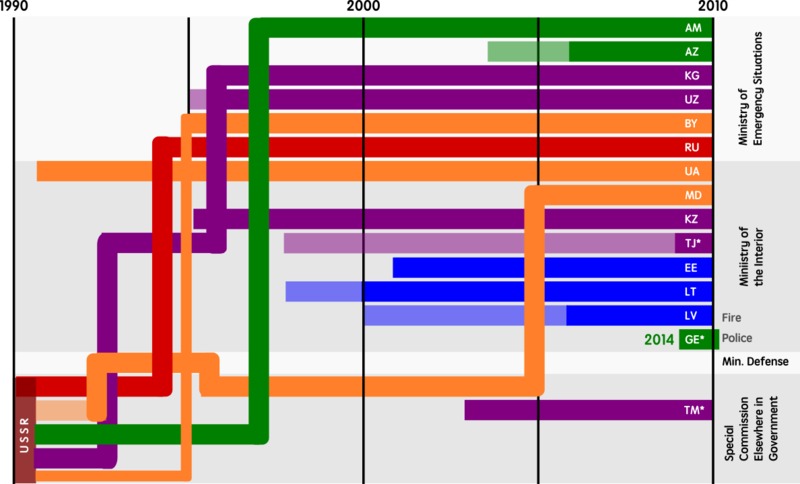 After the events of the mid-1980s, the vulnerabilities within the Soviet Union, a country whose national identity was built upon being self-sufficient and internationally competitive, were exposed. Suddenly the Soviet Union was a place full of environmental and technological hazards without the capacity to adequately protect the public against them. This called into question whether the imminent threat of nuclear war was the most dire danger facing the public, which in turn challenged the wisdom of emergency management based on Cold War Civil Defense tactics.

In 1989 the State Emergency Committee was formed as a part of the Soviet government devoted specifically to disaster response. By this point, the foundations of the USSR were beginning to crack, so it is not so unusual that within a year the Russian council of ministers set up a parallel emergency management organization within a year. It is the Russian agency that is the ancestor of the modern Ministry of Emergency Situations in Russia and many of the successor states. Within a year of the collapse of the USSR, six of the fifteen successor states already had some sort of framework for emergency management in place. These included, unsurprisingly, those countries that had had recent experiences with disaster: Ukraine, Belarus, and Armenia.

A lot of the delay into the mid-nineties for other successor states can be explained by the chaos of starting a new government in the wake of a huge political transition. More interesting are the exceptions, including the Baltic states and Azerbaijan. It is telling that although the entire Caucasus region is in a seismic zone, Armenia is the only state in that area that has had any long-standing agency designed for effective earthquake relief. Elsewhere in the former Soviet Union, Baltic adoption of these legal frameworks and agencies coincides with their bids to enter the EU. Though a changing concept of dangerous space and what it meant to the Soviet Union had influence how many post-Soviet states set up their respective governments, it is but one of myriad political forces influencing institutional change. Despite the exceptions noted above, the broader pattern holds: specialized emergency management has increasingly gained influence as the newly independent states mature.