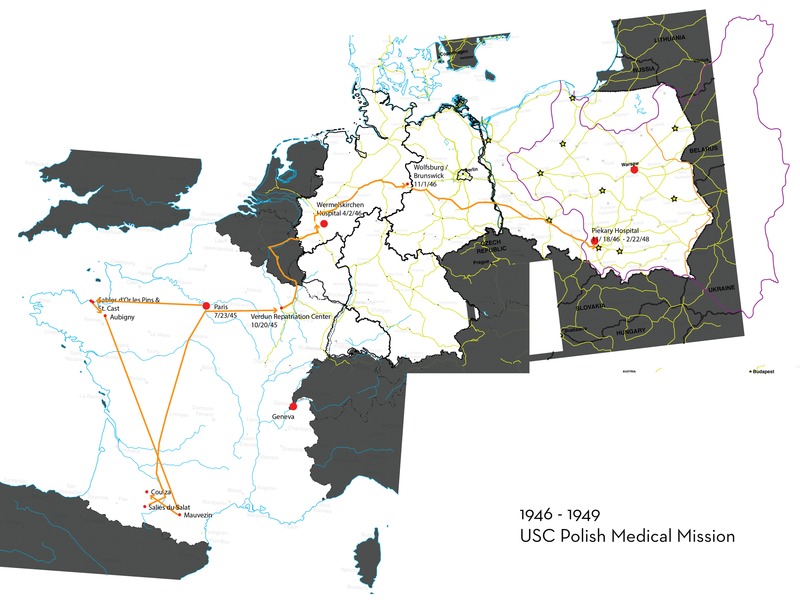 If culture is, as Geertz formulated, "the webs of significance" that man himself has spun and is suspended within, then cultural space must be the temporalspatial index of the webs as they are generated in social practice. Mapping is possible on at least three levels, as a snapshot of the webs from an outside view, as the tracing generated by each strand as it makes its way through space, and as a strand, a relic that becomes read, altered, and resuspended in significance.

To map, this exhibit surmises, is to trace social practice and the contingencies in which they were created. Further, there must be a potential for the agent to map and re-map even as a third party may be privy to the larger context of time and space. By tracing the activities of the Unitarian Service Committee's Medical Mission to Poland, specifically their activity in 1947 in rebuilding the hospital in Piekary, illustrates a potential mapping practice in tracing something like Rabinow's assemblage. The Omeka and World Map format allows such assemblages to be reified quickly and easily, and one can relate appropriate contingencies, or what specific views, actions, and values map onto existing patterns of practice.

For example, the Medical Missions, at least in the documentations of its American workers, pointed to concerns about the Iron Curtain as the space in which they need to operate. The hospital, for example, becomes situated in Red Poland. At the same time, other contingencies may replace the mapping in a different context. In considering the envisioned function of the hospital, for example, the hospital becomes located at the center of a vast coal-mining-state-construction activity. These alternative practices in situ, as mapping or projection, constitute the reification of cultural space.