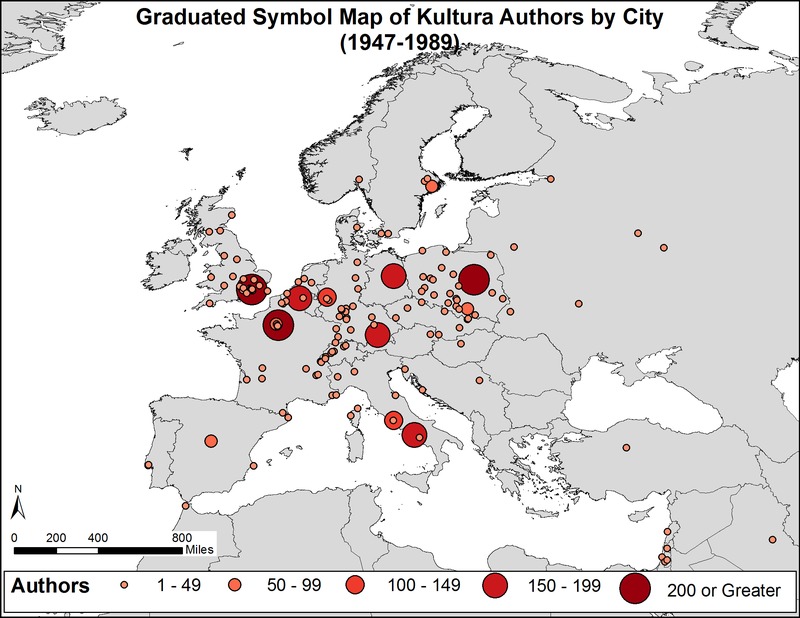 This series provides a closer view of authors publishing in Kultura who were living in Europe at this time. After looking more closely at the aggregate map of Authors in Europe between 1947 and 1989 (Map 1), we notice that the continent is not starkly divided between East and West: this is the first striking view of the movement of texts across the Iron Curtain. In the following series of maps (Maps 2-6), these same authors contributing to Kultura are represented over different periods of time on the European continent.

There are several compelling narratives to be drawn from these maps, some of which reflect the dialogue between Kultura and its homeland during different moments of tension and thaw during the Cold War. During the journal’s first period, there are almost no contributors located in Poland, but after Giedroyc’s new ‘liberal’ attitude of the 1950s (when he began to reach out to authors publishing in Poland, even those whose texts appear officially), more begin to appear (Maps 3 and 4). As samizdat-tamizdat traffic picked up in the late 1960s and early 1970s, the number of contributors from Poland grew significantly, and the next map (Map 5,1973-1982) includes the period of Solidarity and open publishing from Poland. The last map (Map 6, 1982-1989) is again counter-intuitive: martial law did not stop the flow of texts from Poland to the West, but in fact the numbers of authors from Poland publishing in Kultura increases as samizdat and ‘second circulation’ publishing reaches its peak in the mid 1980s.

Different stories can be read from these maps about the role of various European cities as points of transfer and resettlement for emigrants: apart from London and Paris, there is a great deal of variation in the number of contributing authors from cities like Stockholm, Naples, Munich, and Frankfurt. We will single out Munich here, as it was the seat of Radio Free Europe, and therefore its role as home to Kultura authors is directly related to the wave of émigrés who left Poland in the wake of 1956. There is a three-fold increase in the number of contributions from Munich between the first and second periods; the number steadily decreased over the remainder of the Cold War, as those who emigrated to Munich disseminated to points farther West.