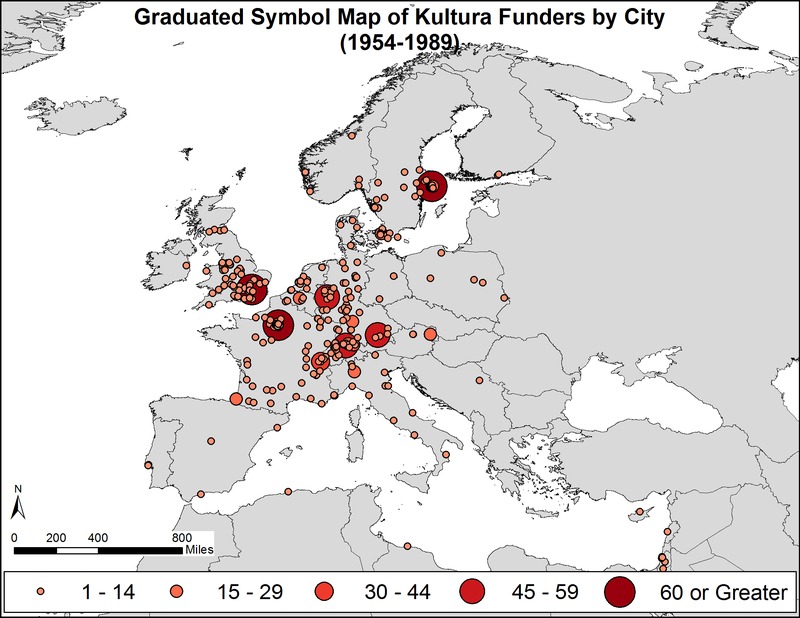 Here is a closer view of the funders of Kultura in Europe, first as an aggregate and then broken down to show change over time.

While the numbers of funders do steadily increase in response to particular political events, the vast majority of them are giving small amounts of money. We find this type of contribution more significant, in fact, than a wealthy donor giving a large amount of money. Some of the most touching “notes” specify exactly what the funds are to be used for. In the beginning, they were almost entirely for the Kultura foundation, i.e., to sustain the journal. There are occasionally suggestions that the funders are sending donations to honor loved ones “zamiast kwiatów” (instead of flowers), or suggest personal greetings. But over the course of the 1970s, the notes start to acquire more political valence until there are funds earmarked for KOR (The Committee to Defend Workers, an early version of Solidarity), Solidarity, the independent press in Poland, “straight to the hands of Lech Wałęsa,” and so forth.

The numbers of authors and letter-writers from Poland grew over time, in synchronicity with Giedroyc’s policies of keeping the door to the homeland open, while there were very few financial contributions from Poland itself. Yet for those in the deep diaspora, Kultura became that open door. They could get news of Poland and frozen memories of Polish culture from Wiadomości (a rival, Polish-language weekly based in London), but by sending a donation to Kultura, they could come into closer virtual contact with Poland. The greetings 'instead of flowers' that émigrés sent might be intended for fellow émigrés, but most often were for people back home. And over the course of the 1970s (1968 through martial law in 1982), donations soared in number, amount, and specificity, until there were hundreds in each issue.