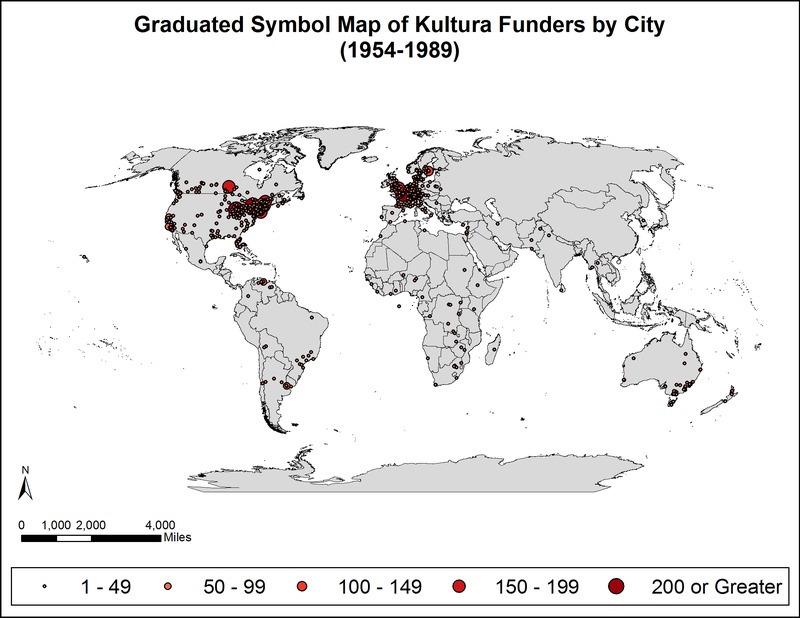 The last, widest and most compelling circle of diaspora Poles who left their tracks on Kultura are the “funders.” These are people who sent in small “wpłaty” (or transfers), initially to support the journal, but later in response to world events and political developments in Poland. Reading the funding patterns from the distance gives us a new picture of how deeply Kultura reached into pockets of diaspora, rather than functioning as a salon journal only for the elite (as depicted in accusations both from Communist Poland, and from the more nationalist corners of the Polish and Russian diaspora).

These maps show an active use of the journal as a medium of communication and connection with the homeland.[i]  If we look at the general trends starting in 1955 (there were no contributions sent in until Giedroyc made an desperate appeal for funds in the mid-1950s), we can see noticeable patterns of response to different politically sensitive moments. Seeing the funders of the journal represented this way shows the third concentric ring of participation: those who do not feel that their voices belong in the journal, but still wanted to play a role in sustaining it. Of course, some authors and letter-writers did send contributions in as well, but the maps make very clear that more individuals are participating as funders, and they are in different places. The funders are located deeper in the diaspora, in small ethnic pockets spread all the way across the North American continent, Western Europe, and Australia, and in strategic locations in Latin America, Africa, and the Middle East.

[i] When viewing the two sets of maps above, there are a few very important variables to keep in mind: a) the initial city-based maps are measuring number of contributions, while the second, country-based cartograms are measuring total contributions of each country in francs; b) these amounts in francs are adjusted for inflation in France, but do not take into account fluctuations in the exchange rate between countries, therefore some countries’ contributions might seem higher than others because of weaker and stronger currencies.