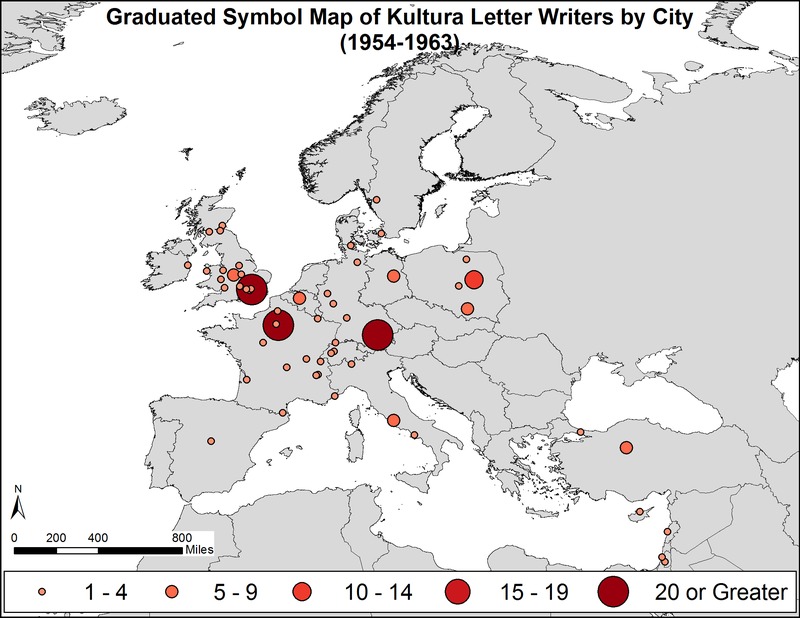 This is a closer view of where the letter writers to Kultura were located in Europe over the period 1950-1989. The initial map (Map 1) shows the cumulative view: the cities we expect to have the largest numbers of emigre Poles also have the largest number of letter writers, i.e., Paris, London, and Munich. Just behind these three in importance are Stockholm and Naples.

However, as we watch these patterns unfold over time, we can see how and why the different centers of letter-writing emerge. In the first few years before RFE is established in Munich, it does not appear at all; only in Map 3 (1954-1963) do we see Munich as a major presence, which then diminishes slightly over Maps 4-5 for the rest of the 60s and 70s. It is interesting that the period after martial law (Map 6) does Munich generate more letters. This is true of letter-writing across Europe and the globe: the period of highest intensity is 1982-1989.

These maps also show the increasing importance of Italy and Scandinavia in the years after 1968, as that was one of the common paths of people leaving the country in this wave of emigration.