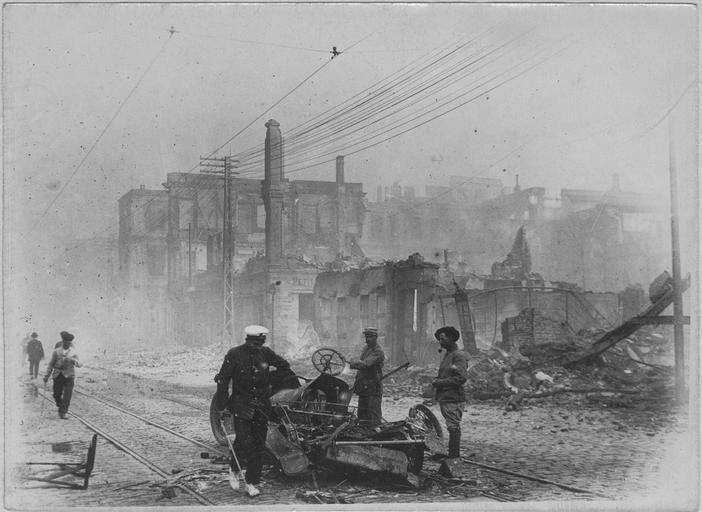 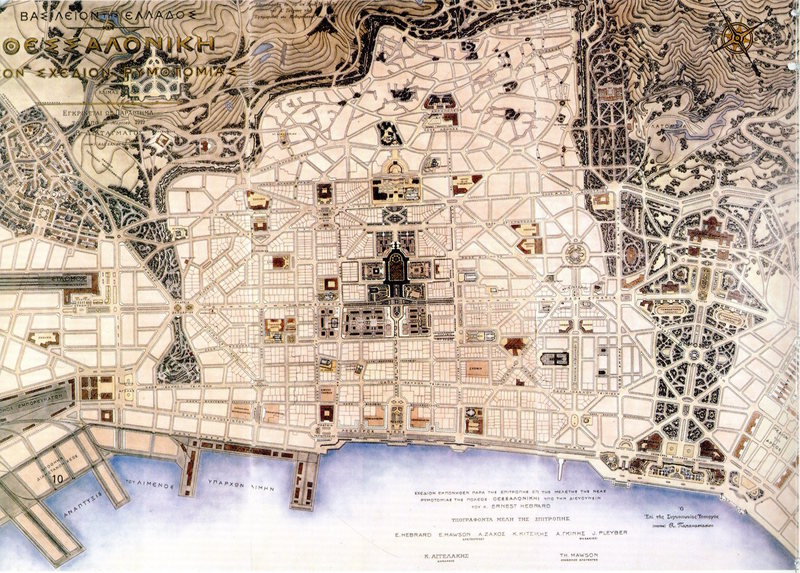 Juxtaposition of proposed plan -by E. Hebrard- for Thessaloniki (with red) and exisiting -1917- fabric of the medieval city (with yellow). The plan overwrote the existing fabric

The great fire of 1917 –5 years after Salonika entered the Greek State- appeared as deus ex machina for the Greek government who no longer had to deal with the complexities of a multiconfessional fabric. The fire had destroyed an extensive part of the intramural city affecting mostly the Jewish quarter and provided the ground for the desired modernization – and westernization- of the city. The aftermath of the fire found the City planning again for the city’s reconstruction. Prime Minister Venizelos appointed planner Ernest Hebrard to lead a team that would urgently come up with a city plan. Venizelos himself saw an immense opportunity in the unfortunate event of the fire, to imbue the new city with the ideals of the new Greek State.

Hebrard proposed a plan that was implementing Avant-guard ideas of the time. The devastated city was redesigned over a tabula rasa, overwriting the property lines and older schemes of organization that were diachronically and traditionally respected in other occasions of destruction by fire. Morphologically the proposal was an amalgam of the beaux-arts aesthetics with the rational modern approach of separation of functions, foreign models that Hebrard brought in the plan, being himself very engaged with discussions and projects in the international scene.

Hebrard incorporated in the plan the preservation and promotion of the city’s byzantine heritage, contributing to the political request of the construction of a Greek identity. It had been obvious since the previous plan (1914) that such an imperative would prevail as a basic choice of preservation for political reasons. Hebrard uses the byzantine monuments as points of interest in order to create squares (that the old city did not have), moments of exception in a regularized and formally defined fabric with characteristic diagonal boulevards. One of the main aspirations of the plan was to introduce a new civic center for Salonika, that found its place in today’s Aristotelous Axis. The plan proposed to preserve some important ottoman monuments, a suggestion that was not received well neither from the public that had connected the ottoman heritage to the occupation and oppression of the ottoman rule, nor from the central government that did not find their presence aligned with the aspirations for a creation of a Greek identity”

The minarets were torn down or left to crumble after fire of 1917 with the same speed that they were constructed. The symbolic connotations of the minaret as the symbol of a long oppression by the Ottomans pushed the Greek authorities to conveniently get rid of their presence, since the fire had done most of that already. The oriental character that was constructed mostly through the minarets was considered as an “anachronism” for the new government. The byzantine past was much more convenient to preserve and the minarets were the first to make room for it. To add to this, the population exchange of the 1923 that brought huge numbers of refugees to Salonika and deported equally huge numbers of Salonika’s Muslims to Istanbul created anger to both sides, that was directed towards the historic symbols of the other side [1] in both cities.

There has always been lingering the question if the political underpinnings backing Hebrard’s plan intended to achieve a demographic redistribution in Salonika in the name of modernization. Its residents disputed the plan -mostly the Jewish community that comprised a 75% of the property owners in the burned area- who had perceived it as a threat for their existence in the city. The dispute was mainly concerned with the properties' readjustment proposal that was suggested by the government of Venizelos, in order to achieve the new plan that would eventually overwrite the old fabric structure along with its property lines. The land readjustment according to Venizelos' plan was to be done through a system of land bonds/shares, instead of expropriation and compensation. This plan according to the opposition was an effort of expelling the Jewish community from the city, given the community’s economic capacity. The real intentions are unclear for both sides but the fact is that the fire and its timing allowed for a general refurbishment of the city, preserving little from its diverse past.