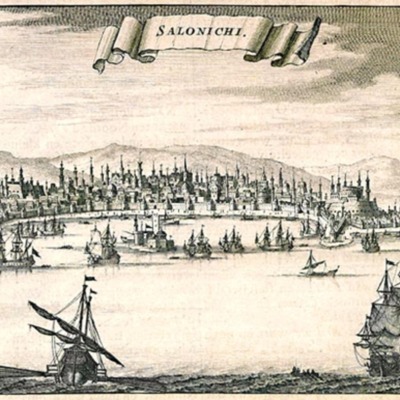 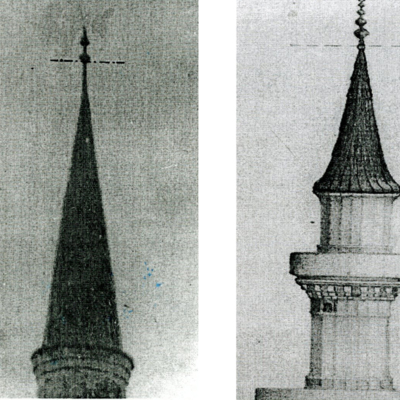 The addition of the Minaret next to the Orthodox churches or to newly built mosques, being a substantial architectural gesture on the scale of the individual building, it is perhaps even more substantial on the urban scale. It is fair to say that the introduction of verticality through the element of the minaret was the formal manifestation of the “ottomanization” of the city, a change in the architecture of the city that reflected a new cultural context, a new political status quo and a deliberate ottomanzation of the city in order to be pinned on the map of the empire. As much as the fin-de-siècle Salonika was a Jewish city experienced through the narrow streets in the center, it was definitely an ottoman city when seen by the panorama of the Thermaic Gulf. In less than a century after its conquest, Salonika’s physiognomy has changed beyond recognition, with the skyline of minarets prevailing as the city’s icon, up until the early 20th century.

The view of the city from the sea provided this panoramic vista of a forest of vertical elements: minarets and cypresses. It was not to be discovered though, until the mid 19th century when the steam engine shifted the travel routes from the mainland to the sea. It is only then that the oriental picturesque view of Salonika was constructed from European travellers who increased dramatically as the steam cruise lines became more and more often and regular, in the Aegean Sea. Poet N. Kavvadias writes that Salonika is meant to be seen by boat and indeed the western icon of Salonika was not the Sabbath hymns in the Jewish quarter as described by Karkavitsas but the forest of ottoman minarets praised by the Europeans who travelled by boat in the Aegean.

The minarets were torn down or left to crumble after fire of 1917 with the same speed that they were constructed. The symbolic connotations of the minaret as the symbol of a long oppression by the Ottoman Empire imposed the need to the new Greek state to conveniently get rid of their presence as soon as the city moved to Greek hands. The oriental character that was constructed mostly through the minarets was considered as an “anachronism” for the new Greek State that sought to define its national identity. The byzantine past was much more convenient for the Greek government’s priorities and the minarets were the first to pay the price. To add to this, the population exchange of the 1923 that brought huge numbers of refugees to Salonika and deported equally huge numbers of Salonika’s Muslims to Istanbul created anger to both sides, that was directed towards the historic symbols of the other side  in both cities

← The Rotunda
Fire and Modernization →
Verticality