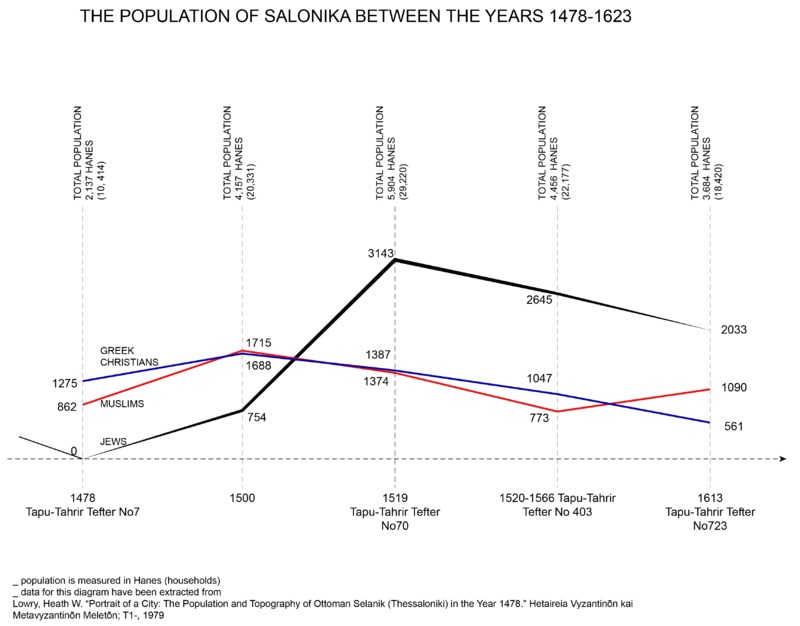 Population changes in Salonika as a result of repopulation and deportations, in the early Ottoman years 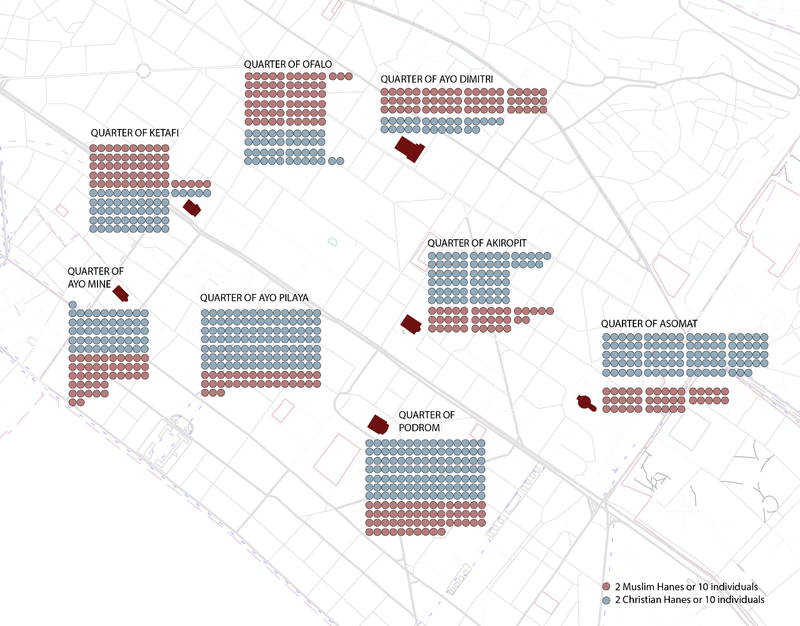 settlement patterns in Salonika of 1478. The newly-arrived muslim population is destributed in all quarters. Repopulation happens in the existing -byzantine- structure of the city

The conquest of the city by the Ottomans brought large demographic changes in Salonika. The arrival of populations in the city of Salonika and their settling in the city was a top-down urban design practice that reformed the urban fabric. The Tahrir Defter of 1478 describes the distribution of the newly arrived Muslim population after the city fell in the Ottomans. These new settlers were congregated in cema’ats (communities of a temporary character) attached to the already existing Greek byzantine parishes. The term cema’at according to Lowry “was applied to new arrivals in a city that were there not of their own free choice but rather as a result of surgun (deportation)”. Indeed deportation and repopulation was a common post-conquest practice of the Ottomans, one that explains according to the same source the sudden absence of Jewish people from Selanik’s 1478 population survey who were resettled in Istanbul after its conquest. Contemporary byzantine chronicler Kritovoulos confirms the policy of Mehmet II regarding deportation and repopulation enterprises:

“When the Sultan had captured the city of Constantinople, almost his very first care was to have the city repopulated. He also undertook the further care and repairs of it. He sent an order in the form of an imperial command to every part of his realm, that as many inhabitants as possible be transferred to the City, not only Christians but also his own people and many of the Hebrews”[1]

The cema’ats soon became proper mahalle (neighborhoods) by acquiring their religious center, and establishing a kind of permanence in space. The core of the Muslim mahalle was either a former Christian church that was converted into a mosque or a new mosque or mescid that was built as soon as the new Muslim population was settled. The equal distribution of Muslims in the city and the provision of places of worship as well as of prayer leaders indicates that the repopulation pattern was not only a desired and organized enterprise, but also that it constituted ottoman practice that explicitly aimed to reshape the city at large - both its demographics as well as its urban form as a conswquence. Similar patterns are observed in Istanbul and Trabzon where repopulation was extensively applied (Lowry). The alteration of the city’s demographics through the repopulation practice of Mehmet II turned Salonika from a “domain of idolatry” to a “domain of Islam” as 15th century chronicler Ashikpashazade writes[2].

← From the Grid to the Quarter
The Rotunda →
Repopulation and deportation