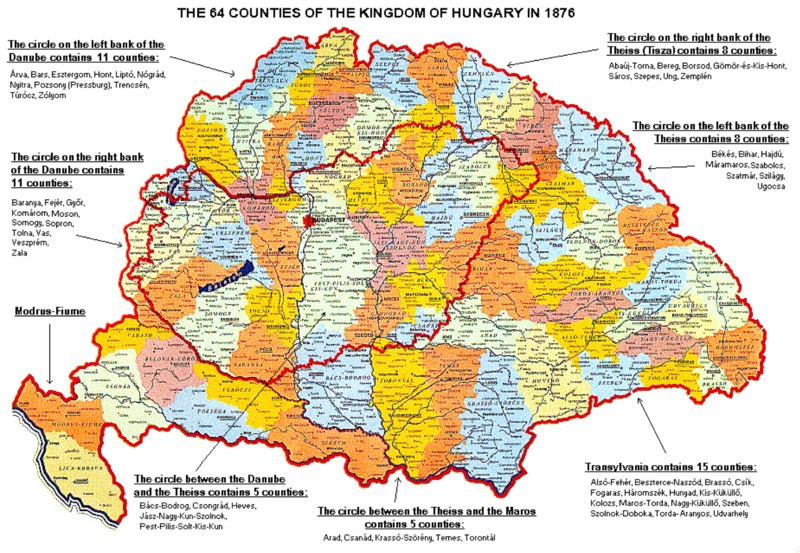 Map of Hungarian borders before Trianon

The idea of home suggests a special, privileged relationship to a place. Any attempt to map this relationship thus has the idea of relational space embedded in its very fabric. Map of homelands and maps of origins are not only emotionally charged, they can also have serious political repercussions. Maps of national territory have been extremely important ways of mapping relational space since the rise of nationalism. Ernest Gellner famously defined nationalism as the belief that the boundaries of the nation and the state should be congruent. Mapping national territory, therefore, is key to nationalist projects everywhere.

The embedded map depicts Hungary in 1876, and is faithful to the political borders of the time. However, its affective history extends much farther than this period. After many of the outlying counties were reassigned to neighboring nations at the Treaty of Trianon in 1920, Hungary assumed its present-day shape. The pre-Trianon map corresponds to the national memory of "Greater Hungary," and is tied to both gentle nostalgia for the Austro-Hungarian period and extremist, irredentist claims to reincorporate the "lost" territory. The outline of this map has become an iconic marker of the latter idea, and is reproduced in many forms (from mugs to earrings to tattoos and t-shirts) so that Hungarians can easily demonstrate their attachment to Greater Hungary in all aspects of everyday life.

← Genome
Other maps of Greater [Fill in the Blank] →
National Imaginaries