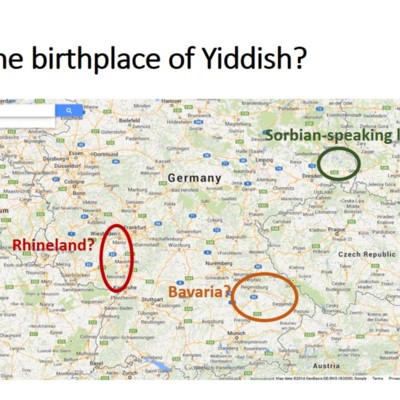 Map 1: Geographic location of three rival theories about the provenance of Yiddish

Language has been one of the primary markers of where a "homeland" begins or ends. In the maps of national imaginaries in the previous section, we have seen examples where linguistic pockets that lie outside of current-day borders fuel claims for larger territory. Hypothetically, if nation-states were really as linguistically or ethnically homogenous as their creators often intend them to be, this might even make sense. In Central and Southeastern Europe especially, language was the oranizing principle for determining where a nation state might be.

However, in reality, this is never the case. Homelands, no matter how strongly imagined, always contain a linguistic diversity that defies the logic of ethnic-national-linguistic homogeneity. And we take the case of Yiddish to be one of the primary counter-examples: it is a language spoken across a vast territory with little regard for borders.

There is a further paradox of Yiddish in this context: on the one hand, it has no homeland, as the two official languages of Israel are Hebrew and Arabic; on the other hand, for Ashkenazic Jews in diaspora, Yiddish has served as a kind of homeland. Uriel Weinreich's College Yiddish (first published in 1949) opens with the following Yiddish reading passage in Chapter One:

"Jews in All Lands"

"There are thirteen million Jews today. Jews live on all continents. [...] In many lands, Jews speak Yiddish. Yiddish is the langage that of Jews in many lands. Yiddish unites Jews in all lands" (30).

And a little later on, in English, Weinreich comments:

"Yiddhs has served as the tei between Jews of various countries. After the great migration of Jews from Eastern Europe to North and South America, to South Africa, and to Australia, Yiddish has remained a vital link between outlying communitites all over the world" (36).

While Yiddish as a homeland-in-language-in-diaspora is hard to dispute, the origins of Yiddish have been a subject of significant controversy among historical linguists. The featured article from The Jewish Daily Forward offers an overview of the three rival theories: Max Weinreich's classical theory from early 20c that Yiddish originated in the Rhineland of western Germany around 1000 CE; the "Regensburg hypothesis" of Alice Faber, Dovid Katz and Robert King that emerged in the 1980s; and Paul Wexler's challenge in the late 1980s and early 1990s, claiming that Yiddish originated in Sorbian, a pan-West-Slavic language, later blending with German. Map 1 is an illustration of those three theories on a map of Central Europe.

What makes this debate so striking in lgiht of our project on origins and homelands is that all three theories try to explain the hybridity of Yiddish (which contains features of Germanic languages, Slavic languages, and Hebrew) with a zero-moment, followed by contact and absorption of neighboring languages. Does a language, then, come from a place? Does this tie the wandering Jewish people to a particular territory other than the religiously defined, state-building project of Israel? If the homeland of a diasporic people is in a language rather than a place, what does it mean to trace the language back to its origins, identifying a moment before it ever existed?